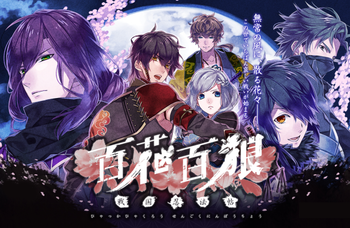 Amidst the wind whirled blossoms in the dark, the cruelest battle begins. What is the price of life?
Advertisement:

Hyakka Hyakurou Sengoku Ninpou-chou, localized in English as Nightshade, is a historical romance otome visual novel, developed by Red Entertainment Corporation and Lantern Rooms and published by D3 Publisher. It was released in 2016 for the PC and the Playstation Vita, and was later released on Steam in English in 2017.

The story takes place in Japan soon after the Sengoku Period. The Tensho Iga war has decimated the Iga clan, with the few remaining members being adopted into the rival Koga clan. As part of this process, Kando Ueno and Kagari Momochi were married, and their daughter, Enju Ueno, is our heroine. She is considered the village's princess and a symbol of peace, but longs to be recognized as a shinobi. Her wish seemingly comes true when her father assigns her to her first mission in Kyo, the capital, along with a number of her friends, who are also skilled shinobi. But conflict looms on the horizon, threatening both Enju's life and the country's peace.