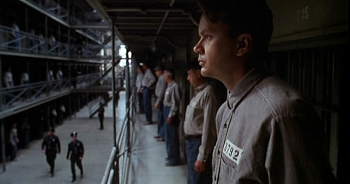 Jail, the Big House, the Slammer.

If a show is set in Prison, the wardens and/or guards usually contain at least one Drill Sergeant Nasty, and there is a prevalence of gang violence, drug abuse, and Prison Rape. Due to the need to present the setting as extremely violent, dangerous and chaotic, shows set primarily in prison, such as Oz, will frequently use Red Shirt characters.

See Prison Tropes and Crime and Punishment Tropes for tropes that frequently come into play in stories featuring prisons.

Prison as the main setting:

Prison is frequently used as a set: