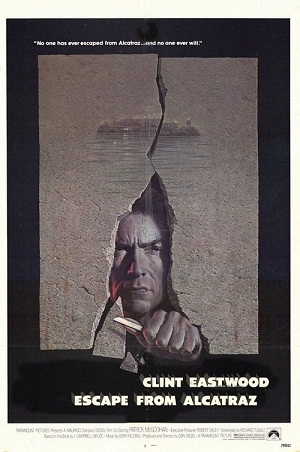 "No one has ever escaped from Alcatraz... and no one ever will."
— The Warden to Frank Morris
Advertisement:

Escape from Alcatraz is a 1979 American prison action film directed by Don Siegel. It is an adaptation of the 1963 non-fiction book of the same name by J. Campbell Bruce. The film stars Clint Eastwood, and features Patrick McGoohan, Fred Ward, Jack Thibeau, Larry Hankin, and Roberts Blossom in supporting roles. Danny Glover also appears in his film debut.

In early 1960, Frank Morris (Eastwood), a prisoner with an exceptional I.Q. who has absconded from other facilities, arrives at the maximum security prison on Alcatraz Island. Soon after arriving, he is summoned to the office of the warden (McGoohan), who curtly informs him that Alcatraz is unique within the U.S. prison system for its exceedingly high level of security and that no inmate has ever successfully escaped. Over the next several days, Morris encounters bank robber brothers John and Clarence Anglin (Ward and Thibeau), who are his old friends from another prison sentence, and he makes the acquaintance of prisoner Charley Butts (Hankin). Morris notices that the concrete around the grille in his cell is weak and can be chipped away, which evolves into an escape plan.

How much of the Clint Eastwood film can you trust? Well, Alcatraz really was a harsh prison off the coast of San Francisco. Frank Morris and John and Clarence Anglin really did cut the vents out of the walls in their cells using spoons and really did trick the guards using the old dummy-head-in-the-bed trick. They really did escape, leaving behind a fourth prisoner (named Alan West, not Charley Butts), and really did disappear without a trace.

Tropes that apply to the movie include: