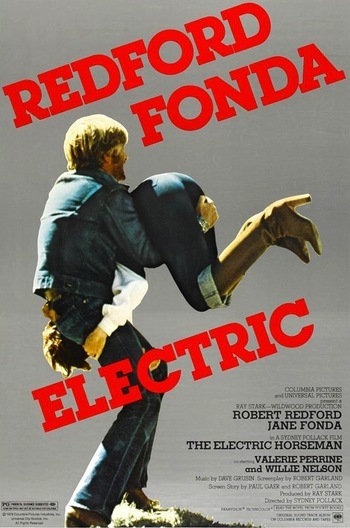 Sonny Steele (Redford) is a washed-up rodeo star who was once a champion, but is now a drunk who is reduced to making cameos in a lit-up cowboy costume (earning his nickname) and hocking breakfast cereal. He is scheduled to appear in a commercial with Rising Star, a retired champion racehorse that the cereal company bought. When he arrives at the commercial shoot, he finds that they've shot the horse up with steroids to bulk him up, and drugged him to make him more docile on the set. Angry with Rising Star's mistreatment and disillusioned with the state of his life, he decides to take matters into his own hands. At a scheduled public appearance at a Las Vegas casino, he rides the horse right off the stage, down the Strip, and sets out cross-country, picking up Hallie Martin (Fonda) a reporter who senses the story of a lifetime.