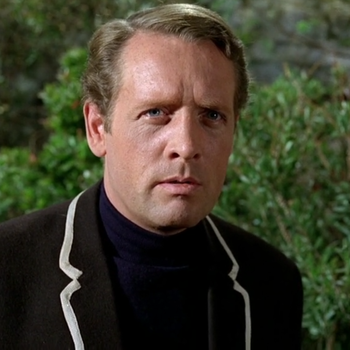 "I am not a number! I am a free man!"
Advertisement:

He was born in neither of those countries but instead in New York City in 1928. When he was a baby his Irish parents moved back to Ireland, but when he was seven they moved to Sheffield, England where McGoohan would grow up. He dropped out of school at age 16 and eventually drifted into the theater. One of his first breaks was a role in a play called Moby Dick—Rehearsed, written and directed by Orson Welles.

By the mid 1950s McGoohan was acting in British film and television. He got a bit part as a security guard in 1955 war movie The Dam Busters. He signed with The Rank Organisation and appeared in movies like Hell Drivers, but was unhappy at Rank and got out of his contract in 1960. His first leading role was a 1959 television adaptation of the Henrik Ibsen play Brand, in which he played the title character for which he won a BAFTA television award. Shortly after, he got his career-making break by landing the lead role of John Drake in spy drama Danger Man. It was a hit in England and America, something that is still quite rare for British television series.

Danger Man led directly to the work that he is most famous for: The Prisoner. That series, which ran for 17 episodes, revolved around an unnamed British spy (not John Drake, as McGoohan always insisted), who, after he resigned his position, was promptly kidnapped. The spy is taken to a mysterious seaside resort where he is held prisoner, informed that "You Are Number 6", and asked only one question: "Why did you resign?" It was a complex Mind Screw of a show with a finale, "Fall Out", that is still considered one of the most famous Gainax Endings ever. Later mystery shows with complex Myth Arcs like Twin Peaks or Lost are Spiritual Successors to The Prisoner.

While The Prisoner was still in production McGoohan appeared in Sub Story Ice Station Zebra. In the 1970s he began to be typecast as villains. He appeared on American series Columbo four times, each time as the murderer, and he directed two more Columbo episodes. He had a big late career triumph as charismatically evil King Edward I aka "Longshanks" in Braveheart.

McGoohan was a devout Roman Catholic who refused to play roles that involved kissing or sexual situations and had a well-documented hatred of guns, refusing to use them; this sometimes hurt his career, like when he declined to play James Bond in Dr. No. However he never regretted turning the part or ones like it down and never sought the spotlight beyond his work, rarely granting interviews and being extremely protective of his private life. McGoohan's last acting role was a voice part in Treasure Planet, seven years before his death in 2009.