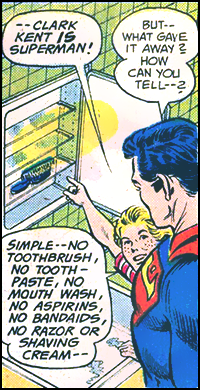 Sometimes the absence of a thing is a vital clue. For example, the absence of fingerprints on an often-used item makes it clear that the item was cleaned. A tool missing from a set could well be the murder weapon. And, as indicated in the page quote, a dog failing to bark at an apparently unknown intruder suggests that the dog was probably familiar with whoever it was.

This is, in fact, one of the harder aspects of real police investigations. The lack of something is easy to miss. However, you have to be careful. The lack of gunshot residue on a person's clothes, for example, does not mean that there was not a gun fired, it means that there is no gunpowder residue to find. Lack of such residue on the glove that an eyewitness saw the shooter use and then dump that is immediately picked up by the police might show that the event was staged, however (as the gloves would have residue and there is no way it might have been removed). Also, in Real Life, people firing a modern semiautomatic pistol often don't acquire any gunpowder residue on their hands; so while the presence of gunpowder residue may be evidence of guilt (weak in itself — the residue could as easily have been picked up at a shooting range), its absence does not exclude a suspect.

Can lead to a Conviction by Contradiction situation if poorly handled.