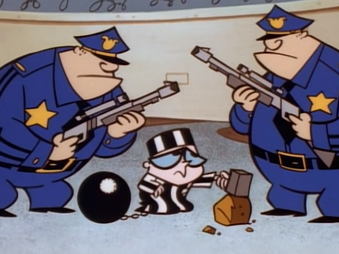 Prisoners don't just sit in their cell for five to ten years in this trope. Rather, they are put to work at something repetitive, tiring, or both.
Advertisement:

Truth in Television. Victorian prisons would normally put weaker prisoners to work picking oakum (unraveling old ropes for reuse as ship caulking), and stronger prisoners would spend their days moving rocks or cannonballs or walking on the treadwheel. Modern examples include stamping license plates (or screen-printing them nowadays), breaking boulders into smaller rocks, and picking up trash/digging weeds along the roads. This trope does not require that the work actually be productive; a Victorian punishment job was using a crank to stir sand in a barrel. Working on the Chain Gang is a subtrope covering those cases when a group of (usually) male prisoners would be chained together to perform some task.

A variant form of this trope is when prisoners of war are compelled to work. The Laws and Customs of War limit what POWs can be made to do for their captors, but fiction tends to stretch the rules for drama.

Prison labor has become controversial in recent years. Manufacturers object to prisoner-made items being sold on the open market, because prisoners don't have to be paid (or at least are paid a pittance) and their products can thus be sold for much less. That bit about not paying prisoners for their labor tends to remind a lot of people of the bad old days of officially enshrined slavery—especially given the now-banned practice in the southern United States of leasing groups of Black prisoners (purely coincidence, of course) to white plantation or factory owners, and the disproportionate presence of marginalized ethnic minorities (again, including Black people) in prisons to this day.note In terms of semantics, if you expand the definition of slavery to encompass any sort of forced labor (instead of only including chattel slavery—that is, designating the unfree laborers as property), then penal labor can be treated as one of various types of slavery. Indeed, in The United States, the Thirteenth Amendment to the Constitution—passed after The American Civil War—specifically stipulates that "Neither slavery nor involuntary servitude, except as a punishment for crime whereof the party shall have been duly convicted, shall exist within the United States …" For these reasons, No Real Life Examples, Please!

Compare to Trading Bars for Stripes, where the "labor" is "join the military", and Boxed Crook, where there's a clear agreement that one job equals freedom. Private Profit Prison is when this goes farther, and the entire point of the prison is profiting off the prisoners in various ways (including labor).