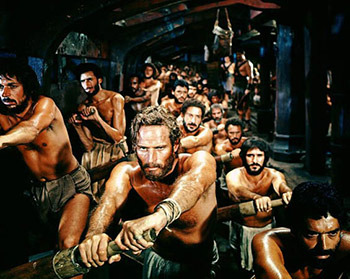 "Row well, and live."
"Pulling the weight up against the wind
is the plight of the galley slave
Chained to this cold bench, six to the oar
Sentenced to an early grave."
— Accept, "The Galley"
Advertisement:

A staple of the Sword and Sandal and Fantasy genres, firmly established by the novel Ben-Hur and its film adaptations (the 1959 one especially). The hero is enslaved and forced to work as a galley rower, while chained to his fellows. Necessary embellishments include:

This drama makes slave galleys one of the rare Types of Naval Ships that occurs in media often enough to have it's own trope, but historically, this trope is Newer Than They Think and belongs in the realm of Briefer Than They Think. The heyday of the slave galley lasted only for some 70 years - from the beginning of the 16th century to the Battle of Lepanto (1571). Galley slaves were introduced only during the Renaissance (16th century) as cannons became the main weapon of galleys instead of ramming and boarding and less skill was required for rowers. Slave galleys were uncommon in the ancient world for various reasonsnote (see analysis page for details), making this trope an example of Artistic License – History. Some nations, such as Venice, never adopted galley slavery. Some, like Sweden and Russia, used conscript soldiers for galley crews.

When being sent to the galleys is a punishment detail rather than a military necessity, compare Prisoner's Work and Working on the Chain Gang.

Compare Gladiator Games, the alternative for a male slave in ancient times. Not to be confused with "Galley Slave", a story about a robot made for proof-reading galley copies of manuscripts.