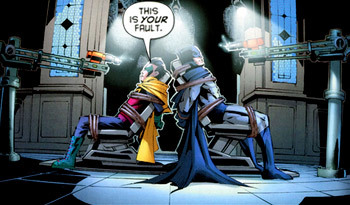 Lasers pointed at my face, it's just another Tuesday.
"I could have killed him when I had the chance, but no... I had to get theatrical."
— Doctor Regulus, Legion of Super-Heroes
Advertisement:

When an Evil Overlord wants to dispatch one of his enemies, he tends to go the extra mile. Sure, he could just shoot them, but where's the fun in that? So, he instead comes up with an over-elaborate, bizarre, and sadistic means to murder his heroic adversary in some potentially horrific fashion. Hence, the Death Trap.

Usually Hand Waved by the villain remarking that simply shooting the enemy is too easy a death for them and instead coming up with something considerably more dramatic and sometimes more slow and painful. It's not just about getting his foe out of the way, it's about proving his superiority. Besides, it makes a useful Cliffhanger to keep viewers on the edge of their seats for the next episode or commercial break. Also, the odds of success in Real Life are probably reasonably high.

However, the villains typically make the mistake of not closely observing the heroes or leaving assuming that the trap will work, and they figure out a way to escape just in time — a form of Genre Blindness to which supergenius supervillains are uniquely prone.

A related phenomenon is the tendency for villains to resort to other means of assassination which are more complicated than they need to be; such as the use of an Animal Assassin or tricking them into killing themselves.

One variant on the trope is it being used as an interrogation method.

The hero is often (but not always) delivered to the Death Trap via a Trap Door. See Booby Trap or Death Course for death-traps used as protection rather than execution (never mind that such obstacles tend to be more deadly to incompetent henchmen than the heroes). Someone who specializes in this is likely a Trap Master.

Expect the villain to helpfully note that You Have No Chance to Survive. Which, of course, you don't.

Here are many types of deathtraps which my peers have resorted to:

And here are some series where different kind of Death Traps play a large role:

Tabletop Games
Theater
Video Games
Visual Novels
Webcomics
Web Animation
Web Original
Web Videos
Western Animation
Real Life
Now that I've told you about everyone else's death traps, I should tell you about mine. As I'm sure you'll notice if you look down, you are currently suspended some distance above a pit of deadly sharp spikes. The only thing keeping you from falling is a single electronic latch directly above you. The latch is connected to a computer right over there, displaying TV Tropes on a web browser...
Feedback