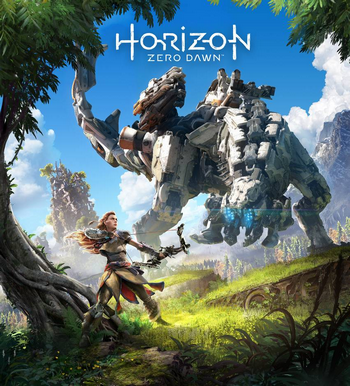 Be a force of nature.
"To us were left the splendors of creation. Beasts of air, water, earth... and steel. It is one thing to hunt a beast, another to hunt a machine. You must be humble and respect their power. I will teach you this, one day..."
— Rost
Advertisement:

Horizon Zero Dawn is a post-apocalyptic Action RPG from the Amsterdam-based developer Guerrilla Games, best known for Killzone, and written by John Gonzalez, the lead writer behind Fallout: New Vegas. Released for the Playstation 4 on February 28, 2017, then later on Steam on August 7, 2020.

In a future where cities have fallen into ruin to be reclaimed by nature, new tribes have risen up, and strange animalistic machines now control the land. The story focuses on a young woman named Aloy (Ashly Burch), who hunts these machines in a post-apocalyptic setting that mixes futuristic enemies and weaponry with beautiful, untamed wilderness. Born into ostracism by superstition and her attachment to the one charged with raising her, she embarks on a journey to find answers to the mystery of her birth, seeing her climb from lowly beginnings to great heights, aided by a mysterious artifact from the civilization of the past.

Its DLC expansion pack, The Frozen Wilds, was released on November 7, 2017.

Like HADES, it was probably never intended to actually talk to people, and takes even less direct notice of them.

Like HADES, it was probably never intended to actually talk to people, and takes even less direct notice of them.