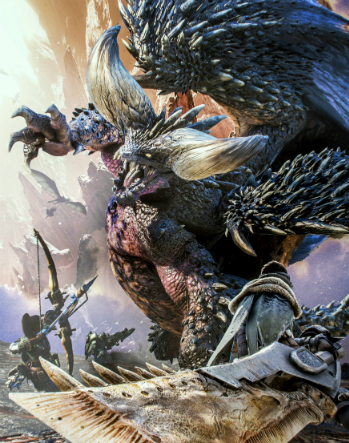 A new world awaits.
Once you board this ship, there is no turning back. The next ground your feet will touch will be that of the New World.
— The Admiral
Advertisement:

Monster Hunter: World is the main entry in the fifth generation of Capcom's popular Monster Hunter franchise, released on January 26, 2018 on the PlayStation 4 and Xbox One, and on August 9, 2018 on PC. It is the first major title to be truly released on a home console rather than a handheld since Monster Hunter 3 on the Wii,note Portable 3rd, 3 Ultimate and Generations Ultimate were first released on handheld systems before their more popular home console ports resulting in a huge jump in graphical power and overhauled game mechanics.

The player takes control of a hunter sent to the New World, a largely unexplored continent far from the series' usual setting, with the Guild's Fifth Fleet to join a research expedition. The main subject of that research? The Elder Crossing: a migration of Elder Dragons to the New World which historically occurred every few centuries, but now takes place every decade. As the player explores the New World alongside their Handler—a chipper young woman tasked with taking care of their logistics—and their Palico combat buddy, the secrets behind the continent's unique ecosystems and the Elder Crossing slowly come to light.

The game is currently Capcom's best selling game of all time, with total shipments of over 12 million units

An Expansion Pack subtitled Iceborne was released September 6, 2019 for consoles, and on January 9th, 2020 for PC. The expansion features a new story scenario where the appearance of a new Elder Dragon, the icy Velkhana, leads the Research Commission to settle and investigate a second island. Iceborne also introduces the new Master Rank difficulty, updates to every weapon's gameplay, and new and returning monsters.