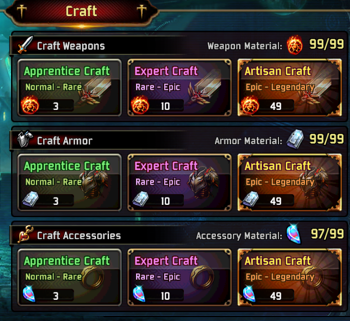 Whether you're playing a single-player RPG, or a MMORPG, you're bound to encounter items (weapons, armor, jewelry, etc.) that are divided into at least three tiers of power and rarity that just happen to be Color-Coded for Your Convenience. Rarity gives us a visual indicator of how one item compares to another in terms of game advancement. If rarity didn't exist, there would be more of a need to test or compare stats before you'd even know whether to get excited that you got a particular item. Rarity offers an immediate clue as to whether an available item will be effective against the tier of enemies you'll encounter at your current level.

As opposed to tropes like Power Glows and Bling of War, Color Coded Item Tiers are strictly non-diegetic, used only to help the player distinguish the item's power through inventory background or item name color. Usually, the colors are, as codified by World of Warcraft, mundane white items, followed by green "uncommon" ones, blue "rare" ones and purple "epic" ones. Sometimes, orange or golden tier of Infinity Plus One Weapons is used as well. The only consistent pattern is that White, Gray and Green are towards the bottom of the tier and Purple and Orange are usually towards the higher end (if they're even there), but whether white is the absolute lowest or purple is the absolute highest or there are 3 or more colors or whatever is up in the air.

A subtrope of Colour-Coded for Your Convenience and Tier System. Compare with Law of Chromatic Superiority.