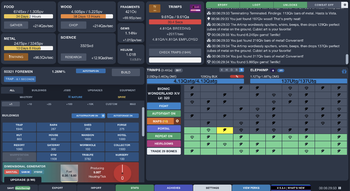 A green shimmer erupts then disappears, and you hit the ground. You look pretty hungry...
— The first message you see when you open the game.
Advertisement:

is an Idle Game by GreenSatellite. Originally browser-based exclusively, in May 2022 a Steam version alpha was released as well.

You start off alone in the wild on an unfamiliar planet. By building a trap, you catch an impish creature, which you decide to call a Trimp. Catching more of them and putting them to work, you start to build a small society. Soon, you have enough resources to start sending out your Trimps to explore the world.