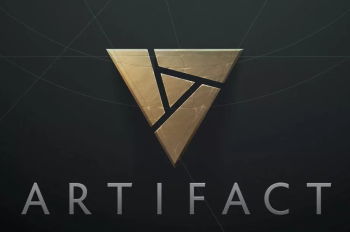 Artifact is a Card Battle Game by Valve Software, set in the Dota 2 universe. The game released on November 28, 2018 on Steam.

As in other card games, players can build decks from a wide variety of cards, including five hero cards which represent the many heroes of Dota 2 as well as some new characters, and hero-specific skill cards allowing them to use their signature abilities. Defeating enemy units earns gold which can be used to buy item cards and upgrade heroes.

Artifact's most distinctive feature is the lane system: the game board is split into three areas, which basically means playing three games at the same time. However, interaction between lanes is possible with certain cards, so one must pay attention to the whole board in order to succeed. Each player has a tower in each lane, and destroying one allows an assault on the enemy's Ancient through that lane. Victory can be attained either by destroying two of the enemy's towers, or by destroying one tower then the Ancient. In other words, it's like the card game version of a Multiplayer Online Battle Arena.

Additionally, Artifact featured a strong Player-Generated Economy, allowing players to buy and sell cards with each other via the Steam Marketplace.

Due to the game's very mixed reception, Artifact was seemingly abandoned a few months after launch, with more than a year going by without any updates. On March 30, 2020, it was announced

that Artifact 2.0 was in the works, with plans for a dramatic retooling of both gameplay and progression. This plan fell through, however, and development was stopped

, with the original Artifact (Artifact Classic) and the retooled Artifact Foundry both being made into fully free-to-play games (Classic grants every card to all players for free, while Foundry has them unlocked through play) with no plans for further development.

Not to be confused with The Artifact.