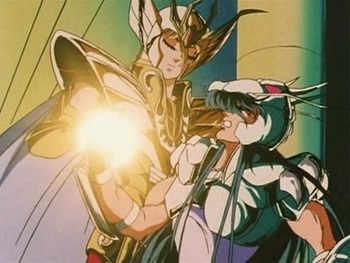 "I know gold's a bit gauche, but I wanted to ensure you grasp my new position atop the pecking order. And for the sake of your feeble mind, let's keep the name simple as well. We'll call this Golden Frieza."
— Frieza on his new Golden Super Mode, Dragon Ball Z: Resurrection ‘F’

Sometimes Red Ones Go Faster. Sometimes, though, golden ones do.

This is Law of Chromatic Superiority applied to the gold color. This has to do with the assumption that gold, as the metal, is rare, and thus something golden is standing for wealth and power.

This could be by a gold Sixth Ranger being equal to or better than the Red Ranger, an already Red character turning gold as an upgrade, a gold tier above other tiers, or something else. Whatever the case, Gold is simply the best.

Chrome Champion, Bling-Bling-BANG! and Bling of War are related, but are not part of the same Metallic Motifs purpose of "just better" as the Law of Chromatic Superiority. note In terms of value rate, though, it may be beaten with Platinum or Diamond... but then it's no longer about color.

Compare Power Glows, Gold Makes Everything Shiny, Gold and White Are Divine and Golden Super Mode. Contrast Worthless Yellow Rocks. Purple Is Powerful is the more mundane counterpart, but (especially in a Yellow/Purple Contrast) can be just as deadly.