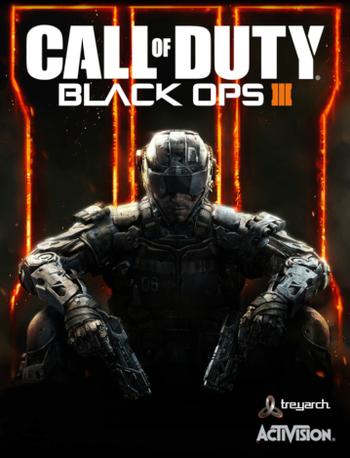 Paint it black
"We wanted a perfect future and fuck, we got it."
— John Taylor
Advertisement:

The highly anticipated sequel to Black Ops II and 12th game in the franchise, Call of Duty: Black Ops III developed by Treyarch brings the fighting to the 2060s, where cybernetics are the norm, and cyborg soldiers fight on the frontlines. People as a whole live longer, healthier lives thanks to advancements in science and medicine, and the prevalence of advanced prosthetics means that the loss of An Arm and a Leg is nothing but a trivial matter.

However, all is not well.

Global conflicts, climate change, and the rapid expansion of new technology has left the world in a state of upheaval. The two major powers on the planet, the predominantly West-backed Winslow Accord and the Common Defense Pact supported by Russia and Eastern Hemisphere countries, are locked with each other in an ongoing Cold War where the battles occur only in the darkest shadows.* sounds familiar, don't it? To make matters worse, the city-state of Singapore has suffered a massive chemical disaster, one that killed 300,000 and left the rest trapped in an exclusion zone, at the mercy of the elements and ruthless criminal organizations. Thanks to a previous drone attack that nearly crippled the United States, world militaries have focused their efforts on creating nigh-impenetrable air defense networks, meaning that major military actions now rely on literal boots on the ground to accomplish their objectives. To compensate, modern foot soldiers are supplemented not only by advanced humanoid drones that can far out-pace any flesh-and-blood grunt, but also by advanced cybernetics that make them into literal superhuman killing machines. In light of these near-constant advances in and apparent dependence on cybernetic sciences to stay ahead of the curve, some believe that humanity's desire to push the body to the peak of their physical limitations is wrong. Some fear that the overuse of technology will spell the end of modern civilization, and bring about a new age of control over the public. Some, ever the pessimist, believe it will lead to mankind's complete and utter destruction...

What if they are right?

Some new features in this game, compared to previous COD games, are a 4 simultaneous players coop campaign, the Nightmares mode (the same campaign, except this time, the story is one of defeating a global zombie outbreak), and the high degree of player customizability, in appearance and capabilities.

Trailers and Teasers for the game: "Teaser"

The Zombies mode returns from previous Treyarch-developed games; tropes applying to that mode should be listed there.

Tropes applying to specific multiplayer and Zombies characters should be listed on the characters page.

"Memory isn’t a fle on a hard drive you can delete or rewrite. Memory is just a version of the last time you thought about something."
"Soldier, what is your name?"
"Troper."