Play the Game, Skip the Story 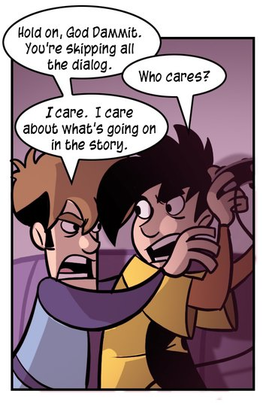 "You're sure to be in a fine haze about now, but don't think too hard about all of this. Just go out and kill a few beasts. It's for your own good."
— Gehrman, the First Hunter, Bloodborne
Advertisement:

Some games are sprawling epics centered about a cast of compelling characters and emotional twists and turns. Some paint pictures of entirely new worlds with considerable background material and long and involved histories. The amount of detail that goes into some games' storylines can rival a big budget movie or television series. Other games are made with no plot at all — the players just want to have fun. Others may have a bare minimum of one.

But then there's this: an especially unfortunate attempt where it is clear that the developers genuinely did spend a lot of time and effort on a game's plot. They clearly were trying for, if not greatness, at least competence. Unfortunately, many other people didn't care. The story might be ham-handed and laughable, the cutscenes might be jerky and unconvincing. All too often, though, maybe the company's only "mistake" was developing the story of a game designed around or played primarily for multiplayer, competitive, or online play. Or it attracted a lot of players to whom the metagame is the main source of enjoyment. Either way, the story goes unnoticed, since much of the player base finds it completely irrelevant to actually playing the game.

Some (though not all) games fitting this trope may have an Excuse Plot that's not really meant for players to pay much attention to in the first place. Often results in a different form of Developing Doomed Characters — nobody's paying attention to the story, all they care about is "Shut up whoever you are".

When the exact opposite happens, that's Enjoy the Story, Skip the Game. Related to Just Here for Godzilla and Better as a Let's Play. Munchkins are the Tabletop RPG counterpart to these players, albeit with a more negative reputation.