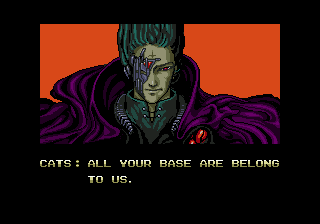 One is all began.
"Stop right there, criminal scum! I AM ASSUMING DIRECT CONTROL!"
Advertisement:

Surely someone out there knows why so many video game-born memes exist. We think it's all Metal Gear Solid 2's fault. Probably.