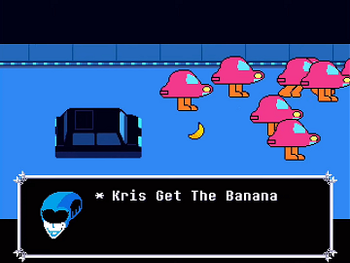 Potassium
WHY BE THE [[Irrelevant Character]] WHO HATES ITS [[Humorless]] FANS
WHEN YOU CAN BE A
[[BIG MEME!!]]
[[BIG MEME!!!]]
[[BIG MEME!!!!]]
THAT'S RIGHT!! NOW'S YOUR CHANCE TO BE A [[BIG MEME]]!!
Similar to its predecessor, Deltarune has gotten its fair share of memes quickly, and the release of future chapters cause even more memes to pop up.

Advertisement:
open/close all folders
General
Chapter 1
Chapter 2 - General
Advertisement:
Chapter 2 - Spamton
Suffice to say, Spamton might be the biggest Fountain of Memes the fandom has seen since Sans, with his manic personality, Electronic Speech Impediment, and surprisingly involved role in the game giving him a wealth of quotable lines and more.
Rouxls Kaard: That wasn'tst really my ULTIMATE meme! I have a wayst better one right... here!
Ralsei: Can we see it?
Rouxls: No