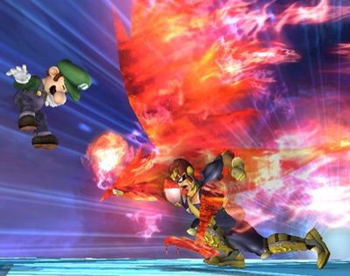 Being the Massive Multiplayer Crossover it is, Super Smash Bros. is notorious for spawning many memes.

Please note, if you wish to add an example here, please leave a note or labelnote explaining why it's an example. Zero-Context Examples are not allowed on TV Tropes. Similarly, please try to keep the memes actually related to Smash in some way and make sure they're relatively well known already in the community. This page is not for forcing anything you find funny to become a meme.

Ultimate alone has so much it has its own page.

Memes specific to the series' competitive scene can be found here.

open/close all folders
The whole series
Advertisement:
Characters
Fan Videos
Forums (usually GameFAQs)
Masahiro Sakurai
Mods
Advertisement:
Audio-Based Memes
Others
Sakurai: Hello, everyone. It is I, Masahiro Sakurai. I am here today to tell you we have ended the meme poll early and tallied up the votes. The results were...disappointing, but not unexpected. You've all wasted your memes. We have disregarded all your meme examples and only have one more Smash meme planned. We look forward to bringing you Red Link sometime in winter. Never ask me for anything ever again.