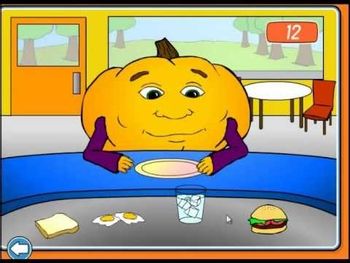 The Hungry Pumkin, the main reason this game is so infamously popular.
Advertisement:

"Pumkin Land" (AKA: "Pumkin World") is an "educational" Flash game aimed at younger children. The game is based on a series of educational digital tools that teach children English language basics.note By this, we mean that it teaches kids the names of everyday things like clothes, colors, and food. These include games and cartoons featuring anthropomorphic pumpkins. (Or as they call them: "Pumkins.")

Not much is known about this game but it has been discovered by Lets Players and Youtube Poopers alike and has gained a memetic status.

The most infamous parts of the site have been taken down, but are archived here.

Due to Flash being shut down, you'll need a third-party player, which might not work properly.

Pumkin Land is made up of the following minigames:
Advertisement:

Give me the tropes:

You know, that wasn't too bad!