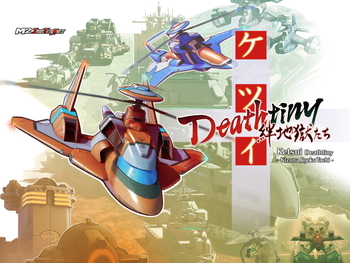 Welcome to Special Round.
"They fight for the sake of a better future, one they themselves will never witness."
—Opening demo, Ketsui Deathtiny
Advertisement:

Ketsui: Kizuna Jigoku Tachi is a Vertical Scrolling Shooter by Cave released for arcades in Japan in 2003, more specifically on a CAVE variant of IGS's PolyGame Master hardware. Its title roughly translates to "Determination: Hell's Bonds."

In the year 2054, chaos grips the world as Global Warming has melted the ice caps, raised sea levels, and intensified natural disasters. With many nations consumed by the destruction, the sudden end of means to acquire all resources force the countries that remained intact, into World War III. Any attempt to cease hostilities by the United Nations is thwarted by an endless supply of technologically advanced weapons sold to both sides of every possible conflict. Investigations by UN are all traced to EVAC Industries, a weapon manufacturer and arms dealer that has been reaping tremendously high profits from the constant warfare. EVAC has even been known to directly intervene to prevent any progress towards peace. The company's profits are so massive, it has built its own cities, shipyards, defensive emplacements and even a private airport, in addition to assemble its own private army of well-equipped mercenaries. All attempts to negotiate with the board of directors have failed.

Unable to perform any official actions, UN sets up a strike team of four pilots, each pair given one of two advanced helicopters which were built according to stolen prototype blueprints and bear EVAC insignias and callsigns. Their mission is to stimulate a rebellion within EVAC's forces and destroy the company's headquarters where their most powerful weapons are being made. The mission cannot be traced back to UN, regardless of the outcome. Even if the mission is a success, both the helicopters and the pilots must be destroyed. To compensate for their sacrifice however, UN will fulfill their dying wishes.

Ketsui was released in the wake of the success of CAVE's previous title, DoDonPachi dai ou jou, on the same PGM hardware. It is known for being very difficult from the get go, with even Stage 1 having beginner-unfriendly enemy bullet patterns. The game's scoring system mainly relies on attacking enemies at close range to reap chips to build up Score Multipliers, most notably the iconic "5" chips. Unlike DoDonPachi, however, the scoring mechanics are considerably more forgiving at the same time, being far less punishing on mistakes (you don't have to run a chain throughout the entire stage). The game is known for not only having a second loop through the five stages that is more difficult, but having a special version of the second loop, known officially as the Special Round (or "Ura Loop", while the standard second loop is called the "Omote Loop") and which has extremely difficult qualifications with even more difficult enemies when you do make it. Making it to the end awards the player with Evaccaneer DOOM, the True Final Boss with the sheer bullet brutality that CAVE final bosses are known for.

Ketsui has received various ports and spinoffs throughout the years:note All titles below are Japan-only like the arcade original, unless otherwise stated

Furthermore, Ketsui has had crossover appearances in other games:

Approach your target and attack! Your mission starts now! Are you ready?

DOOM's back and better than ever!

(footage from DoDonPachi DaiFukkatsu Black Label Arrange, a crossover between DoDonPachi and Ketsui)

DOOM's back and better than ever!

(footage from DoDonPachi DaiFukkatsu Black Label Arrange, a crossover between DoDonPachi and Ketsui)