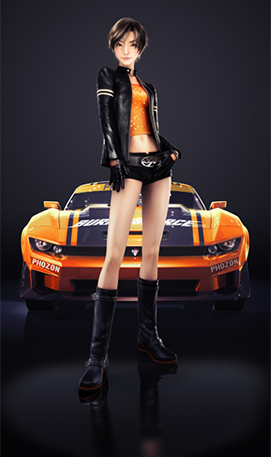 Ridge Racer is a series of racing games created by Namco and initially released in arcades in 1993. They found greater popularity on the PlayStation, where the first Ridge Racer game was announced as a launch title, owing much of its success to its emphasis on fast-paced racing over super-realism. It's become a tradition for a new PlayStation console to have a new Ridge Racer game as a launch title, and the 3DS, DS and Xbox 360 were launched with one as well. So far, seven official games have been released, mostly on the PlayStation. An eighth game, dubbed Ridge Racer Unbounded, was released in 2012 and developed by Bugbear Entertainment (developers of the first two FlatOut games).

Ridge Racer takes place in its own fictional universe, dubbed "Ridge City", complete with its own fictional line of cars and in-game brands (many of which are named after other Namco games). Even the soundtrack is made in-house, atypically for racing games. Starting with the PlayStation Portable games, Ridge Racer began to focus on flashy, hyper-unrealistic drifting; braking is made obsolete as the game locks you to the track when drifting. Unbounded toned down the drifting in favor of large-scale destruction.

The mascot of the series is the fictional idol character Reiko Nagase, who occasionally cameos in Namco's other games.

Not to be confused with Cliff Racer. Now has an Awesome Music page.