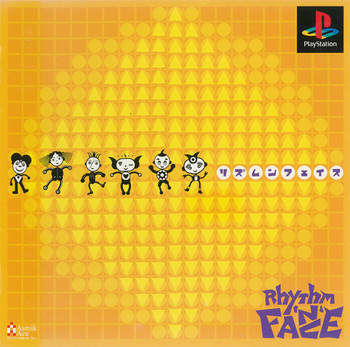 Rhythm 'n' Face is a Rhythm Game created by Osamu Sato and released on the PlayStation exclusively in Japan in 2000, following the release of LSD: Dream Emulator. The game was created largely in response to the rhythm game craze of the time, particularly Parappa The Rapper which it takes some design cues from.

The game revolves around creating faces using a combination of squares, circles and triangles aligned to a grid - in much the same way Sato creates his art - that must be manipulated to the beat of the stage's music. There are a total of twelve stages (not including bonus stages), each of which has its own distinct genre and accompanying character that dances along with the player's actions.

This was Osamu Sato's final venture into video games, and after Rhythm 'n' Face's release, Sato would become solely a musician and artist from then onwards.