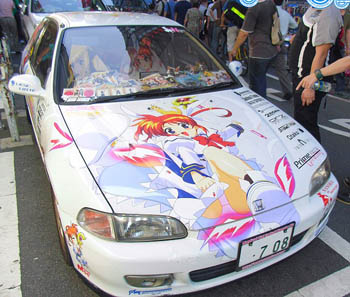 There is an unfortunate amount of truth in the slogan "Anime: Crack is Cheaper". Despite this, there are some otaku who end up with money left over after sinking everything they possibly can into their obsession. For a small and truly devoted subset of these, there is only one option left: Their car.

The term itasha refers to any car which has been modified with vinyls, stickers, or other decorations relating to anime or games - most often featuring female characters and a heavily Moe aesthetic. Literally translated as "Painful car", this is a pun based on the fact that "ita" can also stand for "Italian", a reference to the rather flamboyant/extravagant exterior styling of Italian supercars. The pain in question is referring to either the car being a self-acknowledging eyesore, or the painful embarrassment which the owner is expected to undergo when explaining to his (it's almost always "his") family and friends exactly what the hell he was thinking.

There is an unknown number of these cars currently at large, mostly in Japan; probably the most famous is the Magical Girl Lyrical Nanoha fan-car pictured above, nicknamed Opanchu-go. As per Sturgeon's Law, these run the gamut from beautiful works of Thememobiles as Advertising Campaigns to incredibly tacky rustbuckets with anime stickers slapped on willy-nilly. Surprisingly, even expensive cars such as the Mercedes-Benz SLK and even proper racing cars (explained below) have been known to receive the itasha treatment, although (this being Japan) Japanese sports cars like the Impreza or Skyline tend to be more popular.

Speaking of racing cars turned into itashas, this is what happens

◊ when an Infinite Stratos itasha is entered into Japan's Super GT series. And they were later joined

◊ by a Squid Girl itasha.

An itasha magazine, Itasha Graphics, began publication in May 2008, documenting itasha from all over Japan and providing coverage of itasha meets and interviews with owners. Its much less conspicuous cousin is the itabag, a backpack or bag decked out in smaller merchandise like keychains and buttons.

A Sub-Trope of Pimped-Out Car (otaku-style). Compare Nose Art, which involves similar (but much less geeky) paintjobs on planes and other vehicles.