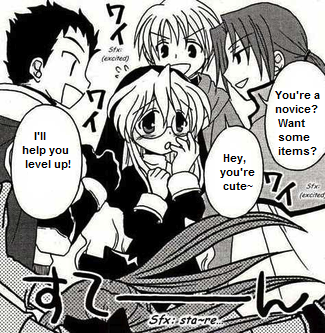 Those helpless eyes are killers.
"Somehow, when I look at her, I feel like I can't leave her alone. I feel like I have to protect her!"
— Chiri Kitsu, Sayonara, Zetsubou-Sensei
Advertisement:

Coined in Japan in the late '90s, "Moe" (萌え, pronounced as "Mo-Eh" [mo̞e̞], derived from a Japanese word that means "budding, to sprout/bloom")note 燃え, also pronounced "moe", is a different word meaning "to burn" or "passion". This is a source of puns. is an ill-defined otaku term that means, amongst other things, "cute", "huggable", or "endearing". While it's sometimes used to describe a series or the phenomenon called Perverse Sexual Lust, it's more about a specific ideal or kind of character, similar to Kawaisa. When used as an interjection, figuratively, it's used to convey that "something blooms inside your heart". It has a basis in the Bishoujo genre.

The classical Moe character, based on that of Conservative Japanese customs, is highly associated with innocence, shyness, humility, submission, helplessness and woobie characteristics (e.g., Prone to Tears, Shrinking Violet, Extreme Doormat, Cute Clumsy Girl, The Ingenue, the Healing-type genre, etc., usually drawn with Tareme Eyes). However, modern variations of the Moe Archetype trend towards upbeat, lively, energetic and extroverted personalities that are far more unique, noticeable and recognizable, such as the Genki Girl, Manic Pixie Dream Girl, Broken Bird and benign variants of the Tsundere archetype. Other contributions to uniqueness can also come in the form of quirks, reliance on Costume Exaggeration, odd language, strange hobbies and the like. Occasionally, these quirks are completely unrelated and seem a bit disjointed.

although exactly "what is Moe" remains debatable.

Such characters are prone to be used to pander to the base. A character with no visible personality traits aside from vaguely cute uselessness is termed the dreaded "Moe Blob". As a result of this, some moe characters are quasi-Animated Actors; the series they star in need not be related at all, being only devices to enable the viewer to enjoy the character. Many of them feature in Gag Series, and only the merchandise for the series shows off its possibly-intended roots, though quite a few merchandise producers use heavy amounts of artistic liberty when designing products.

For the non-anthropomorphic equivalent, see Ridiculously Cute Critter. See also Moe Anthropomorphism, Moe Couplet, Moe Stare; compare The Cutie, a more specific form of Moe defined by innocence, and The Woobie where the focus is about sympathy. Yamato Nadeshiko has a similar appeal but for older characters. Also see When She Smiles for situations where applicable characters get massive Moe points for finally breaking out a smile. In darker series, very likely to suffer Break the Cutie. Weakness Turns Her On is a sort of Distaff Counterpart that concerns women's attraction to moe males. Contrast Rated M for Manly. What Do You Mean, It's Not for Little Girls? when someone mistakes a moe show that's meant for older males for a show that's meant for little girls.