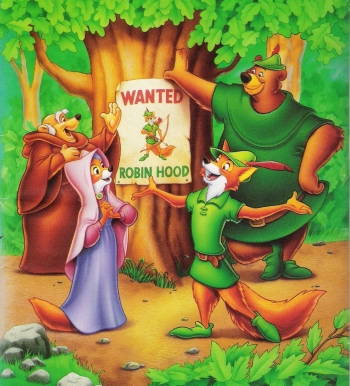 From left to right: Friar Tuck, Maid Marian, Robin Hood, and Little John.
"You know, there's been a heap o' legends and tall tales about Robin Hood — all different too. Well, we folks in the animal kingdom have our own version — it's the story of what really happened in Sherwood Forest."
—Alan-a-Dale's Opening Narration

Robin Hood, the 1973 animated feature by Disney and 21st film in the Disney Animated Canon, takes the classic story of the original Robin Hood, adds and removes stuff here and there, and replaces all the characters with Funny Animals — making this the first Disney Animated Feature to feature exclusively anthropomorphic characters. Among the cast and the animals as which they're portrayed:

This movie was the first in the Disney Animated Canon that was made completely independent of Walt Disney, who had died in 1966 - The Aristocats was personally greenlit by Walt. The studio was suffering financially during its production, resulting in plenty of Recycled Animation from a multitude of films and within itself.note This makes it one of the more economical entries in the Disney Animated Canon Take a shot when you spot recycled animation or an animation blooper.

This film is actually Disney's second adaptation of the Robin Hood legend. The first one was The Story of Robin Hood and His Merrie Men, a live-action film from 1952. Furthermore, Disney has announced a CGI/live action remake of this film, with the same kind of furry characters planned for it.

The phony king of England

After foiling Prince John's latest trap and spending the night out with his love interest, Maid Marian, Robin and Marian join the townsfolk in singing about how awful Prince John is.

The phony king of England

After foiling Prince John's latest trap and spending the night out with his love interest, Maid Marian, Robin and Marian join the townsfolk in singing about how awful Prince John is.