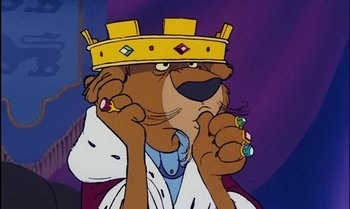 His habit makes him stand out among royalties like a sore thumb.
Advertisement:

Thumb-sucking is an Oral Fixation associated with babies. Normally, most children grow out of the habit. Some older children and adults however keep doing it, much to the embarrassment of others. In comedy this will be Played for Laughs to indicate that this person is a Manchild who never grew up. In drama this trope is used more to indicate a person's insecurity and/or to present him as cute and pitiful.

Thumbsucking with adults is Truth in Television too, as some people still can't shake the habit off as they grow older, usually as a result of some trauma or feelings of stress, anxiety and/or insecurity. It may help them calm down.

The King, Queen, Chef, General, and Maid all suck their thumbs due to having to give their hobbies up.

The King, Queen, Chef, General, and Maid all suck their thumbs due to having to give their hobbies up.