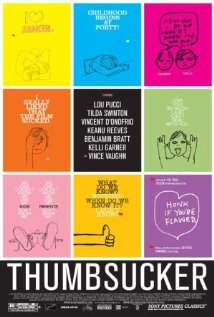 Perry: There's only so much I can do with traditional orthodontics. Justin, are you ready to let go of your thumb?
Justin: Why are you talking like that?
Advertisement:

Thumbsucker is a 2005 American comedy-drama film directed by Mike Mills and adapted from the Walter Kirn novel of the same name. The movie focuses on teenager Justin Cobb as he copes with his thumb-sucking problem, and on his experiments with hypnosis, sex, and drugs.