Western Animation / Welcome to the Wayne 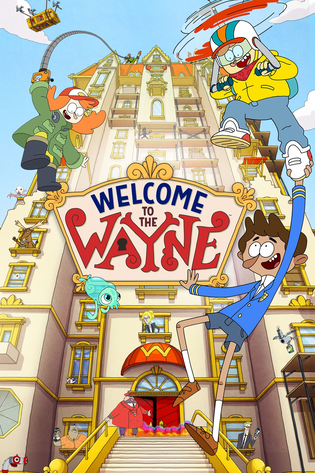 Welcome to the Wayne is an animated series on Nickelodeon created by Billy Lopez (formerly a composer/writer for Peg + Cat and Wonder Pets!). The show premiered on July 24, 2017 and ended on May 31, 2019.

Welcome to the Wayne follows the comedic adventures of three friends, Ansi Molina, Olly Timbers, and Saraline Timbers, as they aim to unlock the secrets of their Manhattan apartment building, The Wayne. Each new investigation brings them face-to-face with new characters, creatures, and oddities that they've coined as “Wayne Phenomena,” getting them closer to uncovering the truth about the weird things happening in their building.

The show began life as a six-episode mini series that aired on Nickelodeon's website in late 2014 before being greenlit as a full-length series, making it the second Nicktoon to be based on a webtoon after Making Fiends. Following a year-long hiatus (in which the show didn't air at all on American television), Nickelodeon aired the remainder of the first season on Nicktoons in October 2018. The second season premiered the following May, with the show's Grand Finale airing on May 31st, 2019.

The mini-series was uploaded to YouTube by Nick Animation, and can be watched here

Welcome to the Wayne provides examples of: