Western Animation / Welcome to My Life 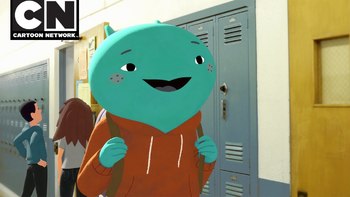 Welcome to My Life is an animated short directed by Elizabeth Ito, a former writer and storyboard artist for Adventure Time.
Advertisement:

The short follows a young monster boy known as T-Kesh, who goes to school with humans. Presented in the style of a documentary, it follows him through a day in his life at school and focuses on his experiences trying to fit in with humans.

The short was produced by Cartoon Network and intended as a pilot for a potential series. It premiered on their YouTube page in 2017. Despite a positive reception, it was ultimately not picked by for a full series.

It can be watched in its entirety here

Tropes found in this short include: