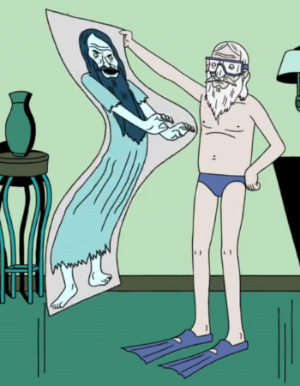 "You DARE call my thinking two-dimensional?!"
"My bracelet did what now? Huh. Who knew? Pretty neat that you can turn into a painting. Wowie-wow, I wish I was you!"
— Ravio, The Legend of Zelda: A Link Between Worlds
Advertisement:

Got a prisoner neither bars nor chains can hold? Flatten them down to two dimensions, and stick them in a picture. From such a prison there can be no escaping, theoretically. As an added bonus, these pictures also make great Soul Jars.

Life inside the picture can vary in many ways, starting with how much freedom the prisoner has.

Generally, in the first two cases the prisoner does not age. With portal pictures they usually do, but in the third case both alternatives are reasonably common.

Methods of releasing the prisoner also vary. With cursed pictures, simply looking at them can release the captive, who gets replaced by the viewer. Pictures holding villains are a form of Sealed Evil in a Can, and the prisoners usually can only be freed by sinister rituals. Those holding heroes are more likely to respond to such things as the tears of a true love, or to require epic deeds to be done in the world within the painting.

While oil paintings are traditional, any kind of picture can be used. Another common variant is to use a mirror. With these, people looking in the mirror may see the prisoner in place of their reflection, or dimly superimposed on it.

Sub-Trope to Anomalous Art. If the person is forced to immobility, may become a case of And I Must Scream. This sort of trap has a strong possibility of being the work of a Mad Artist. Compare Crystal Prison.