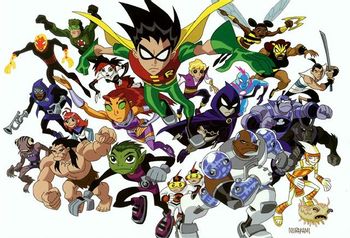 TITANS, GO!
"There was an idea, Stark knows this, called 'The Avengers Initiative'. The idea was to bring together a group of remarkable people, see if they could become something more. See if they could work together when we needed them to, to fight the battles that we never could."
— Nick Fury, The Avengers (2012)
Advertisement:

A mish-mash team of superheroes, who don't really have anything in common except that they fight as a team. They probably don't share philosophies, world-views, moral codes, or origins; they may or may not even like each other very much (or at all). The only thing that matters is that the members show up when they're needed.

A Super Team may all live in the same place (if they do, the audience can expect occasional friction from that). There is often an overarching organization they've all been recruited by, or work for, to help explain why such different characters band together despite their differences.

If the team does get all "I'll do anything for you man! You're like family to me," then they've become a Badass Crew, and probably have to come up with some Badass Creed and the like. If they're actually related, they're a Super Family Team. Exclusively magical or supernatural Super Teams qualify as a Supernatural Team. If the team all has related powers and color-coded outfits, you're probably looking at a Sentai.