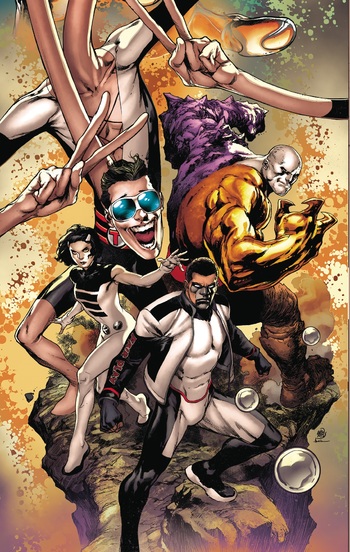 The Terrifics is a comic book series that began in February of 2018, created by Ivan Reis (Blackest Night, Aquaman, Justice League of America) and Jeff Lemire (Animal Man, Green Arrow, Old Man Logan), published by DC Comics. It spins out of the Dark Nights: Metal event and is part of the Dark Matter (2017) line. Beginning in April 2019, the creative team will change, with the comic being written by New Super-Man's Gene Luen Yang and drawn by Stephen Segovia. This is due to Jeff Lemire wanting to focus more heavily on his creator-owned work.

The series features a team of superhero explorers who will come to regard each other as family. The team consists of:

The team forms when Michael Holt attempts to stop Stagg Industries from interfering with the Dark Multiverse, a dimension where nightmares are made real for a time before dying. Assisting Stagg Industries is Rex Mason, and brought along by Holt is a dormant Plastic Man. After a mishap causes all three to fall into the Dark Multiverse, Plastic Man is revived by its energies, and reveals that he'd been stuck in his dormant egg form for "a few years". One of Holt's T-spheres detects a multiversal distress signal, and the trio go to investigate. They encounter a Bgztlian, Linnya Wazzo, who has the ability to phase through objects and between dimensions, but is currently stuck in her intangible form and has been trapped in the Dark Multiverse for quite some time. All four eventually find the distress signal, left by Tom Strong, saying that they may be the last chance for the universe.

Both the series and team are DC Comics' equivalent of Marvel's Fantastic Four, who were not being published at the time of the series' announcement and debut (at least not in the traditional sense).

The Terrifics provides examples of: