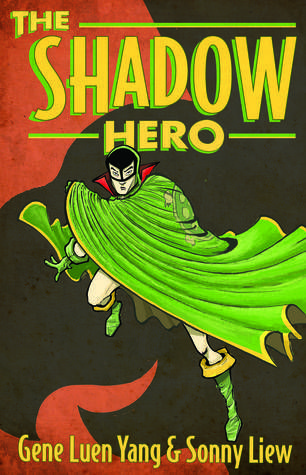 The Shadow Hero is a graphic novel written by Gene Luen Yang, with art by Sonny Liew. It acts as a Revival and Superhero Origin for the obscure Golden Age character the Green Turtle, an American masked hero who helped the Chinese fight the Japanese invaders during World War II. Or rather, it adapts the Urban Legend surrounding the character's creation.

You see, in the original comic strips, the Green Turtle was only seen from behind, or with his face hidden by something. The comics were created by a Chinese-American writer-artist, Chu Hing, and rumour has it that he wanted the Turtle to be an explicitly Chinese-American character, but a racist publisher forbade it.

Yang and Liew run with this to make the Turtle a Chinese-American teen, Hank Chu, who is pushed into becoming a superhero by his mother. But when his first effort to act heroically leads to tragedy, he finds his own motivations.

In May 2017, a sequel was released in honor of Asian Pacific American Heritage Month. The comic was published in partnership with Panda Express and is downloadable for free here