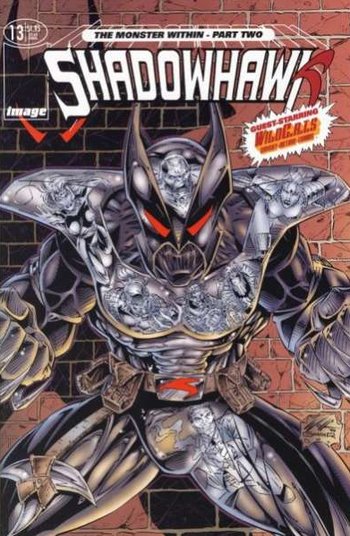 He's the best there is at what he... Oh wait, sorry. Wrong guy.
Advertisement:

Shadowhawk was one of the original seven comic lines produced by Image Comics, written by Jim Valentino. The titular character first appeared in a back-up story in Youngblood, issue two.

The first series followed Paul Johnstone, an African-American district attorney who refused to fix a case for mobsters and was infected with HIV, which later developed into fullblown AIDS. Despite this, he refused to give up and took up the path of a vigilante, forming an alliance with a suspended female cop and using a combat exoskeleton and special drugs to try and slow the infection and give himself the strength to fight crime. Eventually, the disease killed him.

The second series revealed that Paul was merely the host of a "Spirit of Justice" and this entity later chooses a successor in the form of a young high school student named Eddie Collins.