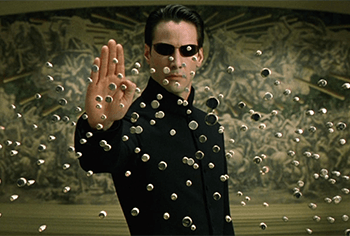 Bullets, stop right there and float motionless in the air. The One commands you!
Neo: What are you trying to tell me? That I can dodge bullets?
Morpheus: No, Neo. I'm trying to tell you that when you're ready, you won't have to.
— The Matrix
Advertisement:

Some characters can Dodge the Bullet; move so fast that not even a high-velocity round, or maybe not even a Very High Velocity Round can hit them. They just move out of the way.

These characters, as the trope name implies, are the opposite. They don't move out of the bullet's way—they literally don't need to. The bullet itself will avoid hitting them. There could be many reasons for this—from psychokinetic power all the way up to sheer dumb luck. The end result is the same regardless: Guns Are Worthless against them, and all they have to do is stand there.

The character is not Immune to Bullets. Normally the bullets never reach him, but if a bullet does reach him (for example, if attacked by surprise), he would be as vulnerable as anyone else. A character immune to bullets receives all the shots and stays completely unharmed by them.

This does not necessarily happen in Soviet Russia. Compare Plot Armor, which is the metafictional protection offered to main characters and sometimes can appear to serve this purpose (especially if Stormtroopers are involved). Also compare A-Team Firing, where bullets dodge everybody, no matter how many bullets/people there are. A sister trope to this is Bullet Catch, where the character physically snatches the bullets out of the air. Also see Return to Shooter.