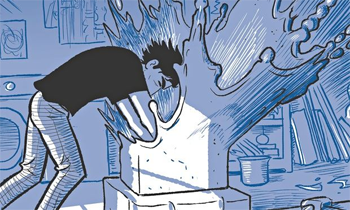 Death: You kids, you're so spoiled! Y'know, billions would kill for a life like that. So what if the art thing didn't work out? Is it really that important?
David: It's all I have.
Death: What would you give for your art, David?
David: ...I'd give my life.
Advertisement:

The Sculptor is a 2015 Graphic Novel written and illustrated by Scott McCloud.

David Smith is a struggling sculptor living in New York City. In the past year, he has lost a major investor due to some disagreements (and David's own temper with other people), sold exactly zero sculptures, and is at risk of being kicked out of his cheap loft.

But just as things are at their darkest, David makes a deal with Death itself: to have the ability to sculpt anything he can imagine with his bare hands. Of course, such a deal comes with a price: namely, David will die in exactly 200 days.

With this firm deadline, David struggles to make a name for himself with his art. But, between figuring out just what he wants to create and discovering the love of his life, David's final days will be filled with both success and heartbreak...

This graphic novel contains examples of...