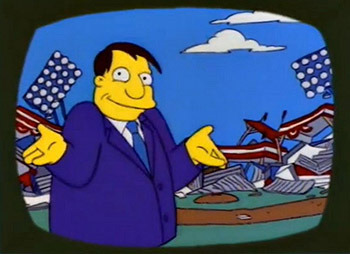 It's not the mayor's fault that the stadium collapsed!
"Oh, I'm quite tired of this lunatic
Why must we suffer 'cuz the mayor's sick?"
— Rasputina, "The Mayor"
Advertisement:

Mayor Pain (a trope about mayors who inflict grief upon the inhabitants of their cities) usually comes in two different flavors, depending on the question: Are they evil or simply inept?

This Trope usually overlaps with Corrupt Politician or Sleazy Politician. Related to President Evil (which applies on a way larger scale). Expect some Permanent Elected Officials to fulfill this trope. Near obligatory in a Town with a Dark Secret, especially one infected with a Weirdness Censor. If this is an Ultimate Authority Mayor, things aren't getting better for the town, and they may need to be voted out or worse. The incompetent version may be an Authority in Name Only.

Not to be confused with the movie Major Payne.