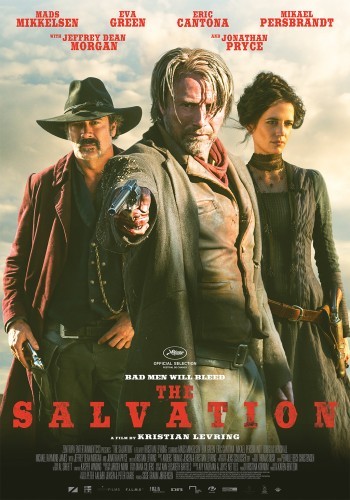 The Salvation is a 2014 Western film directed by Kristian Levring, starring Mads Mikkelsen and Eva Green. It is at once a send-up of classic Western tropes and a fresh take on them. As such, it is naturally troperiffic. And like many Westerns, this is a movie with a serious body count.

Jon (Mikkelsen) is a Danish soldier who fled to The Wild West with his brother, Peter (Mikael Persbrandt), in the wake of a German-Danish war. Having built a farm for himself, he has his wife and young son migrate over seven years later and all looks suspiciously tranquil. Hopping a stagecoach to their farm, Jon is helpless to watch as the thugs they share it with molest his wife while holding his son at knifepoint. Thrown out of the carriage, Jon soon catches up to find they've killed the drivers and his son, then raped and killed his wife; Jon brutally guns down the men in retaliation.

In the nearby town, local thug Delarue (Jeffrey Dean Morgan) visits the bodies of the thugs, one of which is his own brother. Seeing a genuine act of revenge as an attack on his gang that left his sister-in-law (Green) widowed, he starts up a Cycle of Revenge to "avenge" his brother's murder, using his protection racket to keep the local town under his thumb. Of course, it's not too long before Jon has to ride back into that very same town...