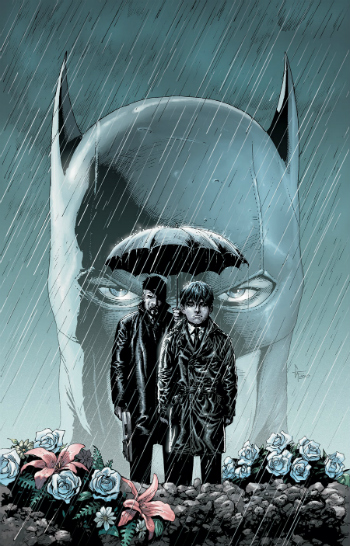 Batman: Earth One is a 2012 graphic novel from DC Comics written by Geoff Johns and illustrated by Gary Frank. The second installment of DC's Earth One line after Superman: Earth One, it aims to update the story of the Dark Knight for a new generation.

You know the basics of the story: Young Bruce Wayne sees his parents brutally gunned down in front of his eyes, and devotes his life to fighting crime, aided by his trustworthy butler, Alfred Pennyworth, and the stalwart cop James Gordon... except Alfred isn't really a butler. And James Gordon isn't very stalwart. And Bruce isn't about "fighting crime" so much as he is about "fighting the man who killed his parents": the mayor of Gotham City, Oswald Cobblepot. About the only thing to remain the same is Gotham, which is as much a Crapsack World as ever.

WARNING: Spoilers for volumes 1 and 2 are unmarked.

Batman: Earth One provides examples of the following tropes: