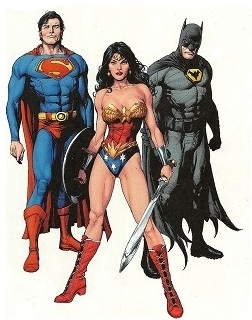 The Trinity for a new generation.
"This freshly created Universe is still cooling and yet unformed. Earth-1's known super-beings - Superman, Batman, Wonder Woman, and the Teen Titans - are at the beginning of their careers. Time and space are still pliable and nothing here is certain."
—The Multiversity Guidebook

Earth One is a series of graphic novels released by DC Comics that was started in 2010 with Superman: Earth One. Like the All-Star DC Comics before it, Earth One is DC's counterpart to Marvel's Ultimate Marvel line. Unlike All-Star however, it follows the Ultimate line more closely by being a modernized reboot of The DCU in a new continuity as well as all of the books having a Shared Universe as opposed to being a series of unrelated miniseries in their own continuity. It retells the origins of various characters such as Superman and Batman, often re-interpreting and modernizing them as well as putting new twists in.

Graphic novels set in this verse are:

Earth One provides examples of: