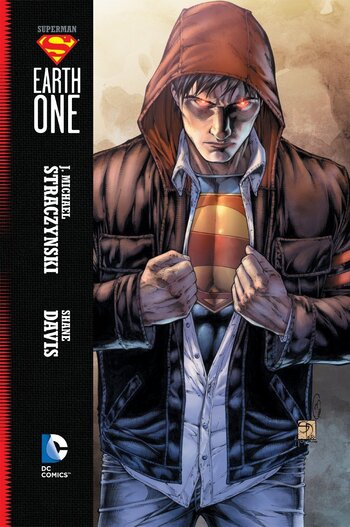 This isn't your grandpa's Superman.
Advertisement:

Superman: Earth One is a 2010 graphic novel from DC written by J. Michael Straczynski and illustrated by Shane Davis. It is the first installment of DC's Earth One line, an Ultimate Universe of sorts where the DC Universe's most iconic characters are re-imagined for the modern era.

The story focuses on a 21-year-old Clark Kent that moves to the big city of Metropolis per the advice of Ma Kent in order to basically "find himself" and do something with his life. A little more sullen and moody this time around, Clark soon discovers that, when a strange evil rears its head, that he's destined to become something much greater than he realizes, even if he doesn't want it at first.

A second volume to the Superman: Earth One series, where Supes battles Parasite and gets involved in both the local problems of his neighbourhood, and a brewing revolution in South America, was released in November 2012, over two years after the original graphic novel came out. A third volume was released in February 2015, and focused on the American military, increasingly suspicious of Superman's motives, plotting to neutralise him with help from Doctors Alexander and Alexandra Luthor, and a strange visitor from the stars with powers similar to Superman's.

Superman: Earth One provides examples of the following tropes: