This page lists the characters appearing in the Superman: Earth One line of comic books. All spoilers from the first two books will be unmarked below. 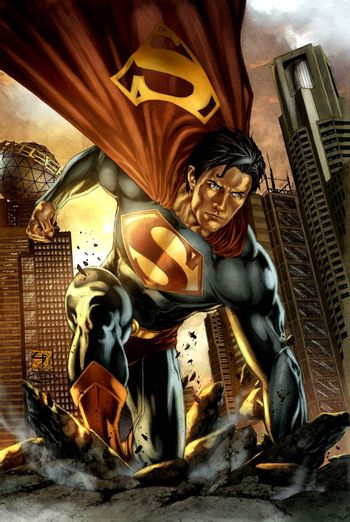 A child of Krypton sent to Earth as a baby to escape the destruction of his homeworld. He crashlands on Smallville, Kansas, and is adopted by Jonathan and Martha Kent. After graduating from high school, Clark leaves Smallville and resolves to find his own destiny.

A staff reporter for the Daily Planet. Aside from being Clark's co-worker, she becomes Superman's closest friend.

An alien from the planet Dheron, a planet located in the same star system as Krypton. He is a vicious warlord who has come to Earth to destroy the last Kryptonian.
Parasite

Originally a common criminal, Raymond Maxwell Jensen becomes a supervillain when an scientific accident turns him into an energy-absorbing entity with constant hunger to absorb others' energy.

Another Kryptonian survivor who travels to Earth looking for Superman.
Alexandra Luthor

A wealthy scientist married to Dr. Lex Luthor. The Luthors are tasked by the U.S. government to find a way to neutralize Superman shoud he ever become a threat to national security. Alexandra becomes ruthlessly obsessed with killing Superman, a fact that disturbs Lex. When Lex is killed by General Zod, Alexandra swears revenge against Superman and demands to be called Lex.

A married couple of Kansas farmers that found baby Kal-El and raised him as their own. Their morality and values inspired Clark to become Superman.
Lex Luthor

A government scientist married to Dr. Alexandra Luthor. The Luthors are tasked by the government to find a way to neutralize Superman shoud he ever become a threat to national security. Lex is the most moral of the two and attempts to talk her wife out of her obsession with killing Superman. He is killed by General Zod, causing his wife to swear revenge against Superman.