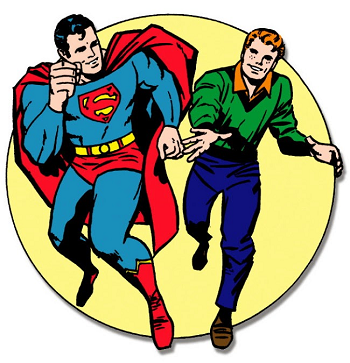 "Sometimes a guy needs a pal out of the locker room."
— Cooper Manning, on his friendship with Saints QB Drew Brees
Advertisement:

But since we're mundanes, the Muggle Best Friend is our relatable character — an ordinary person drawn into the hero's extraordinary world.

They have no super powers, no magic, no Applied Phlebotinum. But despite the danger, they're loyal and will stick to the side of their heroic best friend no matter what the Call to Adventure may throw in the hero's path. They are frequently secret keepers and can be Plucky Comic Relief as well.

They represent the tie that the character still has to their original, pre-super life. They will usually interact with the main character's family, friends and Love Interest even when the hero is unable to. They are most common in shows where The Hero does not have a Five-Man Band — if they do they will be overshadowed as the position of Best Friend tends to go to The Lancer, but might still serve a background function. At some point they will be held hostage by the villain and they are often in the risk of getting Killed Off for Real to provide The Hero with a reason for revenge.

Note that the key trait of the character is that they are a piece of the character's former life and so they do not exclusively appear supporting superheroes or magical beings, but simply shows when the hero moves into a different league after receiving the Call to Adventure.

Also, Love Interests can also be Muggle Best Friends, and will provide a good reason to be equally worried about your secret life and your normal life, especially if you are on a Wake Up, Go to School, Save the World schedule. The Chick can also double as Muggle Best Friend. In circumstances like these, an Understanding Boyfriend may come into play.

Occasionally you will have the Muggle Best Friend wish for powers so they aren't always a liability or potential hostage; they usually end up with powers that last for one episode only — just so they realize being normal is cool enough on its own, or that having powers isn't as cool as it's cracked up to be. For flavor, fits of jealousy brought on by I Just Want to Be Special may pop up and strain things between them before The Power of Friendship reasserts. Once in a while, the friend will leave the trope when they acquire some sort of metahuman abilities.

May cross over and into Badass Normal territory, but mainly Muggle Best Friends are just ordinary people. Related to A Boy and His X, obviously, especially when the X is super powered. May act as the Audience Surrogate. More than one may team up to become Those Two Guys. Compare Fantastically Indifferent and Unwitting Muggle Friend.