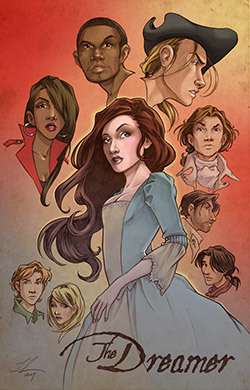 Beatrice "Bea" Whaley seems to have it all; the seventeen year old high school senior is beautiful, wealthy and the star performer of the drama club. And with her uncle’s connections to Broadway theater, the future looks bright ahead of her. Little does she know that her future might actually be brighter behind her.

Bea begins having vivid dreams about a brave and handsome soldier named Alan Warren—a member of an elite group known as Knowlton’s Rangers that served during the Revolutionary War. Prone to keeping her head in the clouds, Bea welcomes her nightly adventures in 1776; filled with danger and romance they give her much to muse about the next day. But it is not long before Beatrice questions whether her dreams are simply dreams or something more. Each night they pick up exactly where the last one ended. And the senses—the smell of musket shots and cannons, the screams of soldiers in agony, and that kiss—are all far more real than any dream she can remember.

Bea begins to research Colonial America only to discover that her dreams recount actual historical events that she knew nothing about! She grows increasingly detached from her friends and family as she tries desperately to figure out what is happening to her...

You can go read it here on the official site