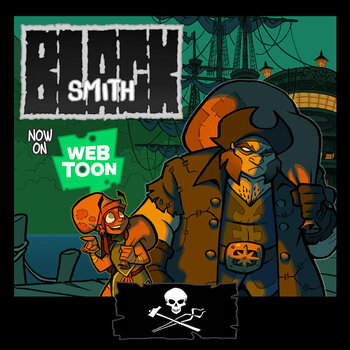 Taking place in the time of piracy, the story follows a young islander name Zoa whose tribe protected a precious relic that was said to have a deity inside. However things changed one day when a dreaded pirate by the name of Blacksmith raids her village, kills the head priestess and takes their relic. Through some... complications, Zoa suddenly finds herself inhabiting the body of Blacksmith due to a botched wish to the deity. While she has control, he's still hanging around as a conscience, forcing the two to work together to find a way to get back to normal. But of course, this endeavor will be anything but easy and will lead them on a adventure to a much bigger picture beyond their scope.

Started in 2021, the webcomic can be found on Webtoon.