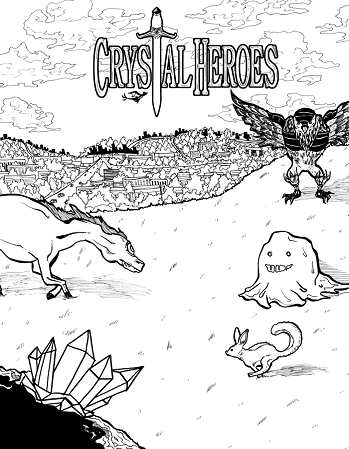 Don't be fooled; none of the monsters on the cover play a role in the actual comic. It is also only occasionally black-and-white.
Crystal Heroes is an Urban Fantasy Webcomic based on Eastern RPG tropes incorporated into a society not unlike our own. Basically, a Fantasy Counterpart Culture to modern America.
Advertisement:

The story follows Marina, a young woman going to Wyrmcaller University, which may seem like an Extranormal Institute, but is just a normal college in their extranormal world.

The plot starts when the university's librarians accidentally misplace a book she needed for a literature class into the Forbidden Section, an RPG dungeon, Magical Library-style built below the completely ordinary school library.

To undertake the quest to retrieve the book, she recruits her friend Isaac, a mages' rights activist; Garrett, a stoic jock with Hot Blooded Sideburns; and Ayanna, a shy girl who joins to live out her favorite video games.

The comic started in early 2017, and went through a lengthy hiatus before returning in 2018. Afterwards, it continued in fits and starts, but was ultimately cut short by the end of 2019, with a rather abrupt ending scene. The comic's website

went offline on January 18th, 2020, but luckily, the entire comic has been preserved

through the Internet Archive by then. This even includes the two

, which were created as an RPG Maker MV attachment.