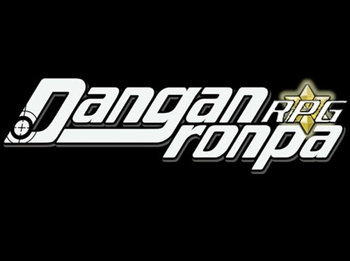 "Stand strong, and don't let the balance be shattered."
Advertisement:

Dangan Ronpa RPG is an in-progress Danganronpa fan-game being created in RPG Maker VX Ace by "New World Order", a team of 13 people. The premise is the Dangan Ronpa series cast in a Medieval European Fantasy Alternate Universe. The characters were each given a Fantasy Character Class that fits their personality and/or talent, a likewise fitting Weapon of Choice, a High Fantasy-esque outfit, and of course a role which rages from being a major character to a one-off NPC.

The plot follows Makoto Naegi, with the help of Yasuhiro Hagakure, Byakuya Togami, Touko Fukawa (and Genocider Syo), Aoi Asahina, Kyouko Kirigiri, and others that are kept a secret for now, on his quest to defeat Junko Enoshima, who is trying to plunge the world into despair. To do so, they will need to travel around and collect the six Hope Shards.

The gameplay is largely the same as most classic JRPGs. The player controls Makoto and his fellow party members on an overworld where he can walk around and interact with objects or NPCs. Like most RPG Maker games, battles are triggered by Random Encounters, are turn-based, and the character with the highest AGI stat goes first after selecting commands.

. The development blog, where updates and other game related posts are made, is here

Spoilers from the main series are unmarked. Only mark spoilers pertaining to this game.