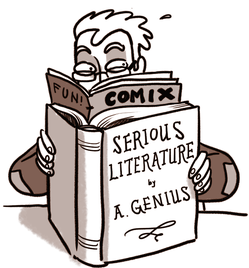 Someone hides their "inappropriate" reading matter behind the cover of something they'd rather be seen reading.

Somebody is reading something but doesn't want anyone else to know what it is. It could be rather inappropriate for clique rank, like a jock reading a girly magazine. It could be inappropriate to read anywhere outside a bedroom, like a magazine with naked women in it. Heck, maybe it's just a comic book, and for the sake of impressing people, it's prudent to pretend to read (insert well-known intelligent-sounding book here) instead... or maybe they're supposed to be paying attention in school and just don't want to. Sometimes, for children particularly, the problem is that people with authority to stop the character will assert that the book is hard, whether for reading level or subject matter, for the character.

In any of these cases, the solution is obvious. The desired book is put on the inside cover of the undesired book. (Bonus points if the cover of the outside book is upside down). That way, everyone will think that the character is reading something worthwhile instead of good-for-nothing smut.

At least, they would think this except they aren't idiots. Inevitably the switch is discovered and the character executing it is embarrassed. And we all learn a valuable lesson - this character wants people to think he's smart, but he's really either a geek or an idiot. Usually the former for sympathetic ones, the latter for non-sympathetic ones.

Compare Newspaper-Thin Disguise. When publishers foresee the desire to hide a book this way, they may release an edition with a Clandestine Cover.